Read our two-part blog and learn why wisdom teeth can cause problems and whether to remove them or not. 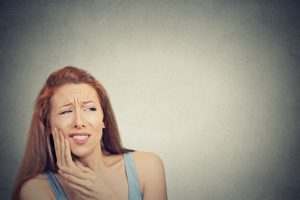 Wisdom teeth have always been around and have always caused problems ( although not in every  case ). Human beings  have  genetically evolved to have 32 teeth of which four are 3rd molars and because they are the last to ‘come through’  after childhood  and apparently when the individual has started to gain wisdom ( ha ! ha!) they are called ‘wisdom teeth’.

Where there is enough space in the jaws ( they are ‘big’ enough) to accommodate all 32 teeth , these 3rd molars will usually erupt straight, in line and be fully functional. In that event ‘nothing’ needs to be done to them other than to keep them as clean as all the other teeth .

However, in some cases, and we don’t know why, one or more of these wisdom teeth ( more often the lower rather than upper ones) , develops lying at an angle and so does not erupt ‘straight’ into the mouth, as the teeth in front of it generally would have done years earlier. Such a tooth is termed an ‘impacted’ (wisdom) tooth, simply because more often than not it impacts against the side of the 2nd molar in front of it. These impactions can be in all sorts of different angles and positions ; some superficial , some deep.

When there isn’t enough space for all teeth to come through in the mouth , crowding (‘crookedness’) and overlapping of teeth ( particularly front ones) usually occurs. In these case it is very common that the wisdom teeth  don’t have enough space to come through ‘normally’. They may or may not be impacted ; but they certainly aren’t ’functional’.

When do they  ‘cause problems’ ?

Obviously , wisdom teeth that have erupted straight  and are fully exposed through the gum ( like all other teeth) won’t cause a problem [unless decay or gum disease is allowed to develop  as in other teeth].

Unerupted wisdom teeth, if deeply buried , irrespective of whether they are impacted or ‘misaligned’ and are not just fully covered by gum but also by the underlying bone, 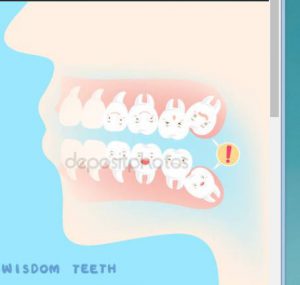 will not cause a problem and can be left ‘in place’ , usually ‘for life’. In these cases, infection does not penetrate around the tooth and they are ‘harmless’. There is a misconception that an impacted tooth that ‘looks’ as if it is pushing against the back of the 2nd molar in front  can ‘cause’ the lower front teeth to start crowding . There is no scientific evidence for that inference.

Front teeth ( usually lowers)  starting to crowd in adult life  are a result of ‘mesial drift’ and are not related to wisdom teeth.

On the other hand, if a wisdom tooth is partially exposed to the oral cavity, that is ‘part’ of it is through the gum, then plaque , food debris,  bacteria etc. can collect under a gum flap or down the side of the tooth, often between it and the 2nd molar in front. This can result in inflammation , pain , swelling etc. Such a tooth may be lying on its side , may be impacted ( which is why only a part of the crown is exposed in the mouth ) or even may ‘look’ straight but because the back part is covered by bone it  can’t fully expose into the mouth .

Occasionally teeth can be fully and (relatively) normally erupted , but are simply covered by a flap of gum which is either ‘traumatised’ by being bitten on continuously by an erupted opposing upper wisdom tooth or because infection has formed under that gum flap ( between it and the underlying wisdom tooth crown).

To find out more about when to remove or not to remove wisdom teeth, please read part 2.