Beauty is in the eye of the beholder

Which of these smiles are aesthetically ‘OK’? If I asked a random 100 people this question, would they all come up with identical answers? 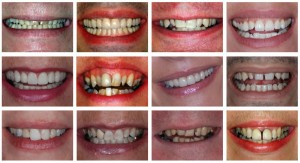 What’s interesting is that it’s easy to show images of really ugly teeth and, equally of beautiful ones ….and everyone will be in agreement. It’s the ones in the middle that are interesting.

I could show any of these images (other than the ones of the obviously beautiful smiles) to a number of people and ask them what they notice in each that they might think was unattractive. There would be an enormous difference in what elements they noticed. That would probably even apply to the majority of dentists, except for those experienced and involved in aesthetic dentistry.

These are questions that many patients face when they see a dentist who is not just orientated towards dental health and function but aesthetics as well.

I will always ask particularly a new patient whether there is anything they don’t like about their smile. If they immediately say that they are 100% happy with it, there is no further discussion on that subject … unless they ask me what I think.

I always emphasise that even my views are based on ‘personal opinion’ and not scientific fact!

If there is interest in discussing aesthetics, I will take a few photographs, certainly: the smile from the front, from each side and a smiling portrait shot. I will then put it up on the screen and invite the patient to make any comments they wish on their own images. I will ask them to point out specifically what they notice. I will then identify what I notice. It’s an interesting game…… I will usually demonstrate between 40% and 80% more points than they will.

What is more interesting however, is how many more points the individual notices when they look at and focus on a picture of their own smile than they mentioned verbally before they had looked at the photographs.

The question posed earlier was: would you invest in correcting a smile and how far would you be prepared to go?

You may be interested to know that about half of the patients who most people might think had pretty unattractive (perhaps ‘putting it mildly’) teeth and smiles did NOT elect to do anything aesthetic about them at all! Might that be a rather, albeit old fashioned, British attitude?

So, do different people and perhaps different cultures view smile aesthetics rather differently?